How to become a BCH Full Stack Developer

This is a guide to becoming a Bitcoin Cash (BCH) full stack developer. It's a deep rabbit hole and a long journey to mastering the full stack of BCH software, but the reward is making modern web and mobile apps that speak directly to the blockchain. But first, lets start with the most basic question: What is a BCH full stack developer? What does that term even mean?

What is a BCH full stack developer?​

Let's start with a couple definitions:

Let's start with the end goal and work backwards from there: A BCH full stack developer, with the skills that businesses are willing to pay good money for, can build a wallet application or some other application that talks directly to the BCH blockchain. It can reliably receive and send transactions. They are able to run and maintain the infrastructure required to support that application.

This guide will give you a road map to acquiring the skills necessary to become a BCH full stack developer. The emphasis is on JavaScript, but the infrastructure applies to any programming language.

Dipping your toes in the water​

This wide range of applications all use the same common back end infrastructure.

The diagram below illustrates the stack of software required to build applications like the ones above. Those applications all fit into the top-most layer of the stack. 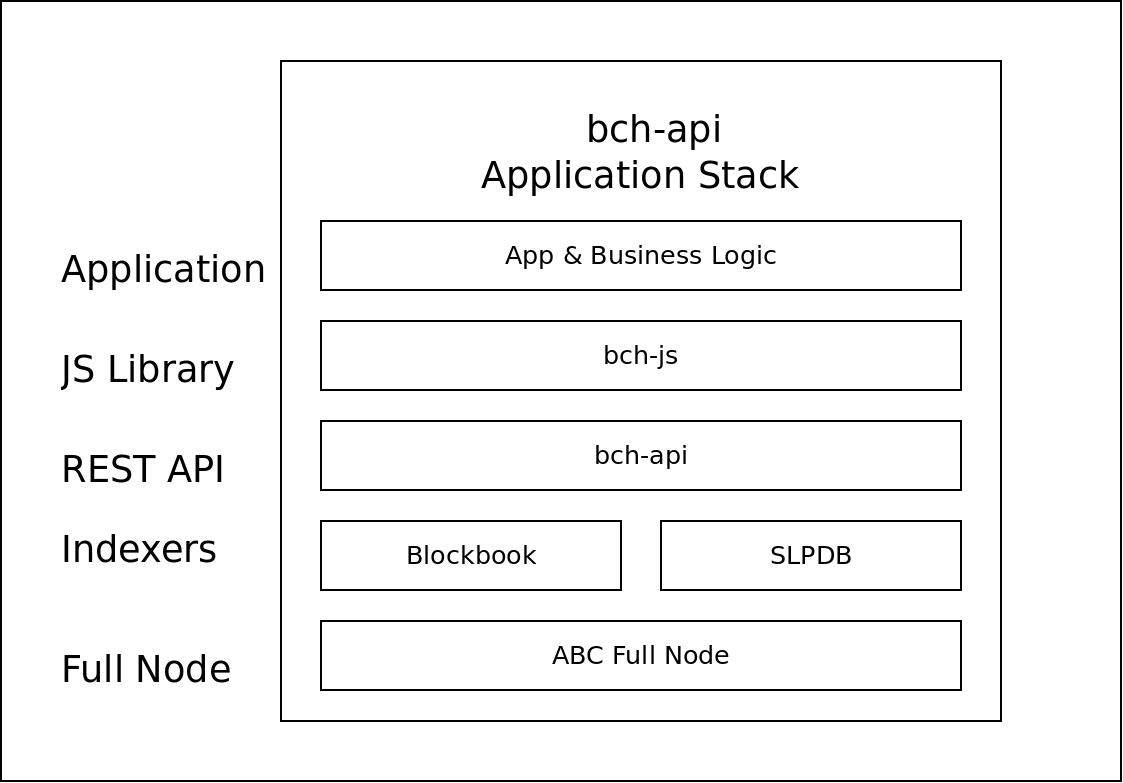 Here is a description of each layer, starting at the bottom and working up to the top:

This entire software stack can be run on a modern computer with 16-32 GB of RAM, 1-2 TB of hard drive space, and a decent internet connection.

I'll explore each layer in more detail in the sections below. I'll also link to Docker containers for running each layer of the stack.

Skipping the back end​

To help front end developers get started quickly, and to remove the burden of hosting your own back end infrastructure, there are a growing list of cloud service providers. This provides convenience at a price.

Note: Trusting a service provider to handle the back end infrastructure for you is convenient, but if their servers go down, your app goes down with them. And unless you run your own fall-back infrastructure, you have no recourse but to simply wait until they get back up and running. This is known as platform risk. The only way to eliminate platform risk is to run your own infrastructure.

Here are a few of the cloud-based REST APIs for interacting with the BCH network:

There are very few free or paid REST API services for working with BCH. The industry needs more, and you could profit by providing these resources. This article outlines the steps you can take to run your own cloud infrastructure, to earn BCH as illustrated in this video:

The full node is the most fundamental piece of software. To run a full node, you'll need enough hard drive space to store the blockchain. This is currently under 200GB, but it's always growing. You'll also need at least 2 GB of RAM. Syncing a full node can take anywhere from 2 days to 2 weeks, depending on your hardware and internet connection.

There are several full node implementations. Here are a few:

This article only focuses on the ABC implementation of Bitcoin Cash. I maintain a Docker container for running this full node. Installation instructions can be found in the GitHub repository for docker-abc.

As mentioned at the beginning of this article, indexers are like little search engines that crawl the blockchain and stitch together metadata that is not directly available from the full node. The two most important features that an indexer provides for wallet apps and other modern applications is:

Those links will take you to Docker containers that I maintain for both indexers.

A few up-and-coming indexers include:

The Simple Ledger Protocol uses an indexer to validate token transactions. SLP tokens are one of the newest, most popular protocols that ride on top of Bitcoin Cash. Each SLP token is a 'colored' UTXO. Token transactions are tracked using OP_RETURN data in transactions. The indexer follows the trail of transactions to track token balances.

My Dockerized SLPDB includes SLPDB, a Mongo database, and the API front end, slpserve. It's the complete package for interfacing to the SLP token world.

The REST API is the communication interface that lets modern web and mobile apps talk to the blockchain. It's a lightweight webserver that wraps the indexers and full node in a REST API. This allows high level applications to talk to low-level interfaces.

Some of the REST API services that exist:

I have not tried out these other REST APIs, but they look interesting:

slp-sdk is a superset of bitbox-sdk. It contains all the functionality of bitbox-sdk, plus the ablility to work with SLP tokens. It also has examples and documentation.

bch-js is a fork of bitbox-sdk, which works with the FullStack.cash API. It also has a collection of example apps and documentation. It has a few additional features compared to the libraries above:

While bitbox-sdk, slp-sdk, and bch-js provide important functionality, most application developers are disappointed in how much bitcoin-specific knowledge is required to interact with them. That's why I created slp-cli-wallet. It's a command-line interface (CLI) app, but it's also an npm library that can easily be included into any other application. It provides high level functions like create-wallet, get-address, and send-bch. It reduces the amount of bitcoin-specific knowledge required to create applications.

Speaking of required knowledge, all developers in this space should read and frequently refer to Mastering Bitcoin Cash. It'll be hard to go far in this space without familiarizing yourself with basic Bitcoin concepts. The book is free and one of the best resources.

Also, there is Badger SDK. This provides React components and other code examples for interacting with Badger Wallet. If you want to replace Paypal buttons with BCH buttons, this is the fastest way to do it.

There is a concept in the startup world of a minimum viable product or MVP. There are so many options of full nodes, indexers, and libraries that its easy to waste a lot of time on a less-than-optimal solution. I've been working full-time on BCH infrastructure for two years. Here is the advice I have to give to aspiring developers who want to set up their own minimum viable infrastructure, it's based on the downloadable databases here.

It will take weeks to sync the full node and indexers on a home computer. To shorten this time, you can download pre-synced databases that contain the last eleven years of blockchain data. Those files are intended to work with the above Docker containers. It should reduce the time syncing to a couple hours.

A final tip: Avoid testnet. It's traditional to develop apps using the testnet so that you don't waste real money. But the reality is that testnet is often too flaky to use, for a number of reasons. At the same time, it's possible to send 1000 sat (0.00001 BCH, a fraction of a penny) transactions on mainnet, with a mining fee of 1 sat/byte, while maintaining a high confidence that the transaction will be included in the next block. That makes a compelling argument to use mainnet for app testing instead of testnet. Most developers I know, including myself, take this approach.

The Bitcoin Cash space is a rapidly moving target. The core concepts in this article won't change much, but the tools, implementations, and libraries are in a constant state of flux. A big part of being a successful full stack developer is injecting yourself into the community, so that you can ride the flow of ever-changing information. Most of the community discourse takes place on Telegram:

The above channels are a great place to get introduced to the Bitcoin Cash developer community. There are many other private channels (requiring an invite) where the real development discussion happens. Asking sincere questions and showing off your work in the channels above are the best way to find access to those channels.

I can't wait to see what you build!