In the Open Source software community, it's become common to collectively refer to a code repository, the developers working with the code, and the users consuming that code as a 'Project'. A 'Project' is not any one of those things in isolation, but the collection of them together. The Node.js Project. The Linux Project. The Mocha testing framework. The Babel transpiler. These are all examples of open source projects.

A Foundation, like the OpenJS Foundation or Apache Foundation, collect and steward Projects. This is the same role that the PSF has been playing.

A Product, without any reference to open source, is pretty widely understood. It belongs to a company and there is branding and other business considerations attached to it. Understanding the intersection of a Product and an open source Project is a puzzle that has fascinated and dogged me for years. Is there a bright line separating the concepts or do they amorphously bleed into one another? What is the 'proper' way to balance these ideas or blend them together?

My last blog post started to explore this idea in earnest. I've started to mentally unwrap the tangle of concepts that make up the PSF, FullStack.cash, and other ideas community members of the PSF have about the organization. Building a Business on Open Source greatly clarified my thinking around these topics. I've continued to have conversations with PSF members and experienced thought-leaders like Mikeal Rogers.

This blog post captures some of my latest ideas on Open Source Products vs Projects, and how these ideas relate to the Permissionless Software Foundation.

Over the course of continuously asking myself the question 'What makes up a Product vs Project?', I collected characteristics that distinguish one concept from the other. This comparison and contrast has helped me grasp the nature of the relationship between the two concepts:

Building a Business on Open Source explains how to setup a healthy, symbiotic relationship between Projects and Products:

Through that relationship, both parties are better off. Since they are playing two distinct roles, the relationship is win-win and there is no conflict of interest.

Recent discussions I've had with PSF membership and industry advisors have inspired me to draw out some diagrams of what these relationships between a Project and a Product could look like. I use the PSF as an example here, but these ideas are only intended to foster discussion. They are not a proposal for the future.

The lens through which I'm viewing a lot of these lessons around Product vs Projects is the relationship between the PSF, FullStack.cash, and private companies that will join the community. Like the Linux Foundation, the PSF is intended to be made up of a consortium of complimentary businesses. Some ideas on the table for other complimentary businesses are:

Underpinning all these organizations is the PSF, which focuses on its custodianship and maintenance of code, code which all these organizations depend on. If the businesses behind a Product can be analogized as a building, the PSF would be the slab of concrete they are all built on top of. The dependencies could be visualized like this:

That image above depicts the dependencies, clearly showing that all the businesses depend on the PSF and share it in common. The dependencies are simple and straightforward. However, that image does not capture the nature of the relationships between the entities. That's not so simple, but equally important. 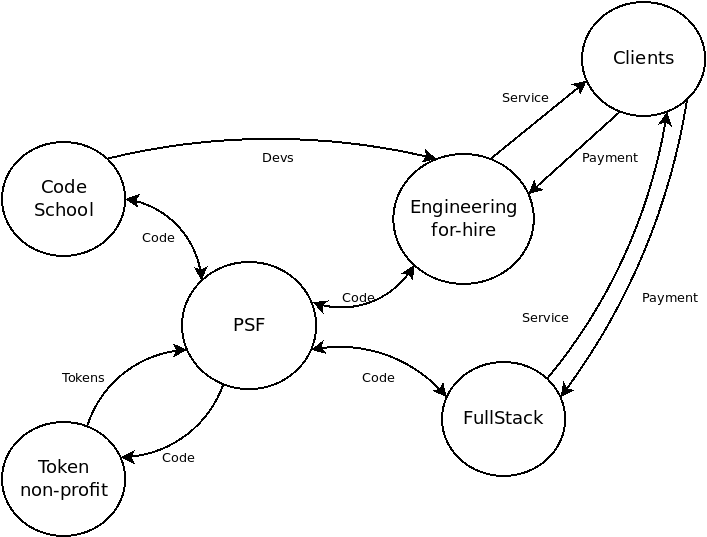 The image above captures the flow of value and the nature of the relationships between the consortium entities.

The diagram of relationships resembles a constellation of Products revolving around the PSF at its center. The relationships between Products is loosely coupled, but they all share the gravity of the PSF in common.

The above architecture of relationships have an impact on the token economics of the PSF. Each company and Product has a dependency on a Project stewarded by the PSF, and they are not required to have a direct relationship with the PSF token. Instead, their relationship switches to a model similar to the Linux Foundation: the companies relationship with the token would be purely for supplying financial support to the PSF (donations) and to influence the governance of the Project (by gaining the right speak in the VIP room).

This means that the Products in the diagram are not included in the circular economy depicted below. That's a bit of a sacred cow for me, as that idea of a circular economy was largely the inspiration for the creation of the PSF. But perhaps its time for that sacred cow to evolve. 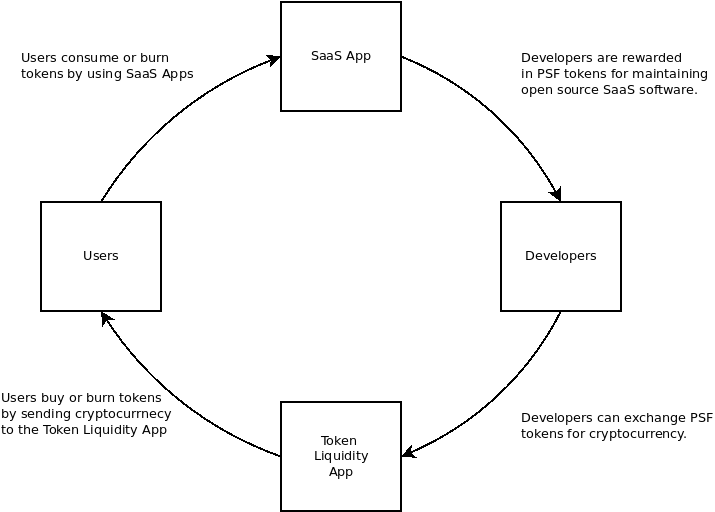 I still believe that a self-funding, circular economy using tokens is still possible. Where:

This idea is not necessarily something that the PSF needs to stop focusing on. The PSF as a Foundation can still develop code like the pay-to-write database project, which is perfectly aligned with the above diagram.

This is an important nuance in the scope of the work done by PSF. I imagine the community will need to be careful about how it categorizes the code under its stewardship. It will need to view each code repository through the lens of the token economy:

The closed-loop framework provides a self-funding mechanism for bootstrapping a project from purely intrinsic activity, to generate funds for the necessary extrinsic motivation. If this model is not viable, then donations is the only viable funding mechanism that I can see.

If I'm right in this conclusion, it will be critically important to categorize and segregate the software repositories based on how they fit within the close-loop token economy. Am I right in drawing that conclusion? That's the discussion I'm looking to have.